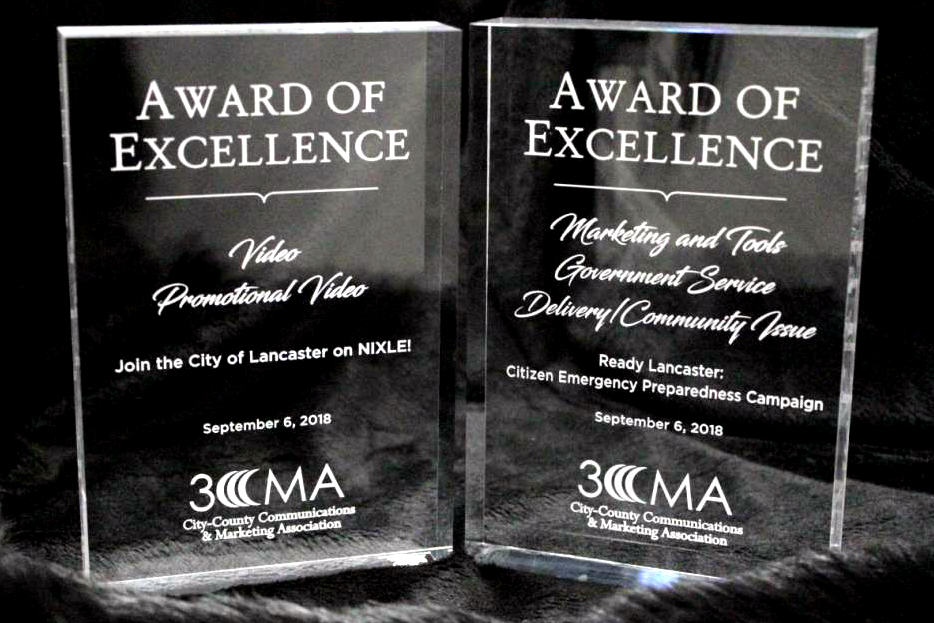 The City-County Communications & Marketing Association, better known as 3CMA, recently recognized two City of Lancaster projects, both of which promote emergency preparedness. The Ready Lancaster citizen emergency preparedness marketing campaign and the “Join the City of Lancaster on Nixle!” promotional video each received Awards of Excellence in their respective categories as part of the nationwide 3CMA Savvy Award competition.

“Public safety is the top priority for the Lancaster City Council – and of course, emergency preparedness is a key component. Exceptional programs such as Ready Lancaster and Nixle help our residents get prepared and stay informed, which in light of the recent wildfires and other events is extremely important,” said Mayor R. Rex Parris. “The 3CMA Awards of Excellence underscore our diligent efforts to strategically promote key City initiatives and programs, provide residents with exceptional platforms for engagement, and identify innovative ways to keep the community informed. It is an honor to be recognized by 3CMA for our accomplishments and commitment to excellence, as we continue to inform and engage with our community. As proven by our state’s recent tragedies, disaster preparedness and emergency notifications are essential. Our call to action remains the same – sign up to be notified in an emergency. It could save your life.”

3CMA is the nation’s premiere network of local government communicators. Each year, the 3CMA’s Savvy Awards recognize outstanding local government achievements in communications, marketing, engagement, and creativity. The Ready Lancaster program received high praise from the judges of this nationwide competition; who remarked that Ready Lancaster has “great marketing tools and design,” is “easy to read and remember,” and the “graphics and branding used throughout the campaign were fantastic.”

The City launched its citizen emergency preparedness campaign, Ready Lancaster, in November 2017, with the goal of helping Lancaster residents take practical steps toward being ready for a disaster. This program makes disaster readiness simple with just three steps: 1) get an emergency kit, 2) prepare your home & know what to do in a disaster, and 3) make an emergency plan with your loved ones. Using diverse marketing tools to reach a wide range of residents, the campaign launched with a two-pronged marketing and community engagement effort, which included presentations to a number of community groups; the distribution of more than 25,000 bilingual pamphlets; a public survey; ads in the local newspaper, social media, and online; and public service announcements on television, billboards, the City’s Outlook magazine, eNewsletter, and even cinemas.

Prior to Ready Lancaster, the City of Lancaster launched its state-of-the-art emergency alert system, Nixle, in order to more effectively communicate emergency information to Lancaster residents. As part of the implementation of this new service, the City staff created the “Join the City of Lancaster on Nixle!” promotional video in an effort to encourage community members to sign up to receive these potentially life-saving notifications. The video was then distributed via the City’s YouTube page and weekly eNewsletter, as well as across its social media platforms – where it reached thousands of people. Nixle marketing efforts, including the creation and distribution of the promotional featurette, lead to the City gaining more than 1,000 new Nixle subscribers – citizens who made the choice to be prepared by keeping themselves informed with help from the City of Lancaster and Nixle.

The animated Nixle video received acclaim from the judges, who remarked that it is “modern, easy to follow and very clean. Also, it had a wonderful use of graphics and voiceover. The call to action was clear and concise.”