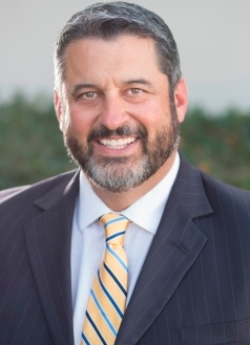 “This marks an exciting transition here in Lancaster,” said City of Lancaster Mayor R. Rex Parris. “Having Jason at the ready, allows us to continue the strong momentum we have built over the past decade. We as a Council look forward to Jason’s vision and strong dedication to the organization and community. He is already familiar with our priorities and styles, and we are ready to work closely with him as we continue to make Lancaster a leader amongst California municipalities.”

Caudle, who has been Lancaster’s Deputy City Manager for the past ten years, will step into his new role December 22, 2018 -- following Bozigian’s official retirement date. Since joining the City’s executive team in 2008, Caudle has been a champion on many key initiatives, most notably the City’s ongoing Alternative Energy efforts and more recently its many ‘Smart City’ measures.

“I am excited to have been chosen to lead our wonderful City staff. Lancaster is an amazing place, and I consider it a privilege to lead our efforts,” said Caudle. “I am familiar with the challenges we face, and look forward to working with the Mayor, City Council, community and staff to further our goals and create a stronger foundation for the future.”

“A City is a trust, and it is our responsibility to nurture, enhance and improve it during our time in leadership,” said Bozigian. “I am happy that one of the most innovative local government professionals I know, Jason Caudle, will now take over the reins. I know with Jason as City Manager, Mayor Parris and the City Council, and our excellent staff; Lancaster’s future will remain very bright for years to come.”

“Ten years ago, the economy had just entered what has become known as the Great Recession. Despite the many challenges presented along the way, our City became extremely resilient and innovative; a reality that has not gone unnoticed by other municipalities as well as many national media outlets. Much of this success has been due to the work of Jason Caudle,” added City of Lancaster Vice Mayor Marvin Crist. “I have been working with Jason for the last ten years, and have always found him to be of the highest caliber concerning competency, commitment, and professionalism.”

Jason Caudle has served as Deputy City Manager of the City of Lancaster since 2008. During this time, he has played an integral role in the creation and development of the City’s downtown area, also known as The BLVD; Lancaster Choice Energy (LCE); the Lancaster Power Authority (LPA); and the California Choice Energy Authority (CCEA).

Previously, Caudle served as the Vice President of Public Finance for an investment banking firm. He also served as the City Manager of the City of Tehachapi; making him one of the youngest city managers in the State of California.

Mr. Caudle holds a bachelor’s degree in Political Science and a Master’s degree in Public Policy and Administration, both from California State University Bakersfield (CSUB). He has also served as an Adjunct Faculty member of the Political Science Department at Bakersfield. Very much a family man, Jason enjoys spending time with his wife Leslie and their two children, Jackson and Kennedy.