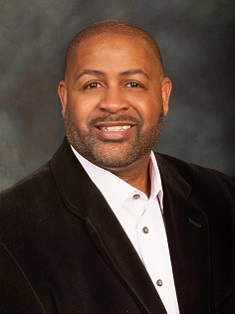 King L. Moore, II is a native of Flint, Michigan.  He is an honor graduate from Flint Northern High School.  Upon completion of high school, his dedication for serving his country was fulfilled by his decision to enlist in the United States Marine Corps.

While serving in the Marines, King was deployed to Kuwait and Saudi Arabia.  He was on the front lines of Operations Desert Shield and Desert Storm.  He received a Combat Medal, the National Defense Service Medal, the Good Conduct Medal, the Southwest Asia Medal, and the Kuwait Liberation Medal, to name a few.

After being honorably discharged from the Marine Corps, King sought to fulfill his dream of becoming an electrician.  He immediately enrolled at The Electrical Institute.  He graduated with honors as a California State Certified General Electrician.  King made the decision to join the International Brotherhood of Electricians.  He was recognized as a standout journeyman.  His love for his craft has kept him employed for 18 years.

King is known for his heart of gold.  His countless hours volunteering with the homeless shelters in Los Angeles, providing food and clothes for the needy, and assisting Veterans who have been displaced is dear to him.  King is the Chairman of the Welfare Committee with IBEW, District 5, Local 11, overseeing the disbursement of financial help to members through their hardships.

King has been a resident of the Antelope Valley since 2002.  He has been married to his wife, Percita, since 1995.  They are the proud parents of two daughters and two sons, collectively.