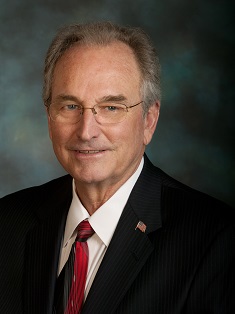 James Vose was born and raised in San Fernando, California. As a forty-year resident and business owner in the Antelope Valley, Vose continues to have a vested interest in the valley's future. His many years of community service have always focused on improving quality of life for its residents, in particular its youth. Vose served on a Board of Education for many years, understands how public meetings are conducted, and believes that open-minded discussion of pertinent issues is necessary for responsible government agencies to make informed decisions while always conforming to the laws and regulations that impact those decisions.

A United States Army Veteran, Vose was employed by Chevron USA from 1960 to 1977 in various capacities, including Retail Representative, Sales and Training Manager. He entered the real estate profession as a REALTOR in 1977, and became a licensed Real Estate Broker in 1981. Vose is a two-time recipient of the Community Service Award from the Association of REALTORS, and was also awarded REALTOR of the Year in 1996 and 2011. He is a life-member of the Kiwanis Club of Palmdale West, having served in numerous leadership capacities over a span of more than 40 years. Vose currently serves as the City of Lancaster appointee to the Antelope Valley College Measure “R” Citizens Oversight Committee and Los Angeles County 5th District Appointee to the Lancaster Successor Agency Oversight Board. Vose is the past chairperson of the Parish Finance Council of Blessed Junipero Serra Catholic Church, and was instrumental in its planning, capital campaigns and construction.

James Vose resides in Lancaster with his wife, Pamela. They share five children and five grandchildren.