Since it was founded in 1850, the Los Angeles County Sheriff's Department (LASD) has had a long history here in Southern California, being instrumental in bringing law and order to the Los Angeles basin during the Gold Rush era.  As the largest Sheriff's Department in the world and the seventh-largest law enforcement agency in the United States (behind such agencies as the NYPD, California Department of Corrections, Chicago PD, and the FBI), the LASD patrols areas from the beaches of Malibu to the west and the deserts of the Antelope Valley to the north, to the mountains of San Dimas to the east and the flat urban areas of Compton to the south.  The nation's first female deputy and the nation's first full-time female law enforcement pilot were both part of the LASD.

Forty cities in the County, including both Lancaster and Palmdale, contract with the LASD for law enforcement services.  In addition all unincorporated areas of the county are patrolled by the LASD.

For forty years after the founding of the LASD, "local law enforcement" didn't really exist in the Antelope Valley due to a lack of population.  That all changed in 1890 with the election of Lancaster's first Constable, Mace Mays.  From that time on until the Antelope Valley's first official Sheriff's station was constructed, Sheriff's offices were generally located in the back of other businesses such as bars and car dealerships.  The first local jail house was constructed around 1900 along Lancaster Boulevard. 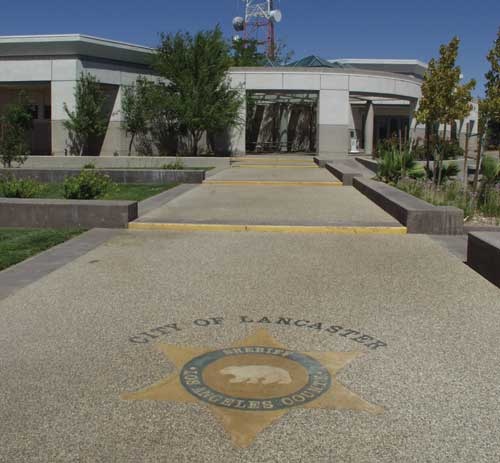 Lancaster Station was opened in 1937 at the southwest corner of Avenue J and 10th Street West, the same year that two-way radio service was first instituted by the Department.  In 1961 the station's name changed to Antelope Valley Station, and remained that until 1996 when it was moved to its current location at Lancaster Boulevard and Sierra Highway and renamed Lancaster Station, four years after Palmdale Station was dedicated.

With over 230 sworn deputies and over 100 civilian personnel, Lancaster Station is one of the largest in the County.  In addition, the station has the largest patrol area at over 600 square miles, covering the entire northeast portion of the County; deputies patrol from Neenach to the west (meeting up with Santa Clarita Station's patrol area), up to County line to the north and east (meeting up with Kern County at Avenue A and San Bernadino County out past Lake Los Angeles, respectively), and down to Palmdale Station's patrol area to the south.  The communities of Antelope Acres, Hi Vista, Roosevelt, and most of Quartz Hill are included in this patrol area.

Being situated at the northernmost portion of the County, nearly isolated in an area known for high crime rates, has its perks.  Lancaster Station has its own satellite Crime Lab, capable of processing almost any kind of evidence including fingerprints, drug/chemical testing, polygraphs, and crime scene photography.  In addition, the Station was named Los Angeles County's first Research & Development Station by Sheriff Lee Baca in 2009, providing opportunities to try out new ideas and technology to determine effectiveness in fighting crime (such as the "Eye in the Sky" unmanned surveillance aircraft, set to begin testing in Lancaster in early Spring 2010).  The Station already makes use of other technologies and ideas, such as vehicles equipped with Automatic License Plate Recognition (ALPR) systems capable of reading and running up to 6,000 license plates per hour, as well as several specialized teams.  These combined practices significantly contributed to a nearly 1/3 drop in Lancaster's crime rate between 2007 and 2009.

Many opportunities for community involvement exist at the Station.  Citizens who wish to know more about the Sheriff's Department and would like to get a taste of what day-to-day operations are like may sign up for a ride-along, while those who would like to give back to their community by supporting their local law enforcement may apply to become volunteers.  Explorer Post #523 provides an opportunity for high school students to earn school credits while learning discipline and responsibility, experiencing patrol operations with deputies, and participating in community events in a support capacity for law enforcement personnel.  The Community Academy is a free 12-week course designed to give everyday citizens an in-depth, behind-the-scenes look at the operations of the Sheriff's Department.  Finally, the Antelope Valley Sheriff's Boosters help raise money to provide much needed equipment and financial support to the Lancaster and Palmdale Stations, such as GPS units, extra radios, and specialized vehicles.